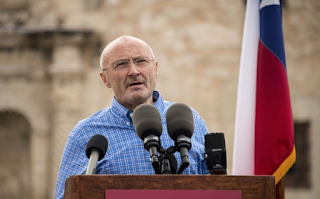 When Rock Star Phil Collins was growing up in London, he was fascinated with Davy Crockett and the Shrine of Texas Liberty.  Watching the 1950s Disney series featuring Fess Parker as Davy Crocket kick started his love of the Alamo. "I've had a love affair with this place since I was about 5 years old.”

In 1973 when his band Genesis was touring the US, Collins scheduled a day off to visit San Antonio. "I was just spellbound when I first saw it in person," he recalled. "Having lived all my life, to see it in books and movies and the pictures in magazines, it was really quite extraordinary."

His then wife bought him his first artifact in the 90s. Since then his collection grew to over 200 items and was worth millions. It included Davy Crocket’s rifle and Jim Bowie’s knife.   "Some people would buy Ferraris, some people would buy houses, I bought old bits of metal and old bits of paper," Collins said. "It's at my home, in my basement in Switzerland. I look at it every day, but no one else was enjoying it."

On June 20, 2014  Phil Collins announced that he was donating his collection to the State of Texas for display at the Alamo. He pledged that he would keep buying artifacts and after a month or so enjoying them he’d would donate the also.