Everything You've Ever Wanted to Know About San Antonio's Ghost Crossing


UPDATE:  In October of 2018. Union Pacific Railroad upgraded the tracks and eliminated the grading that allowed your car to roll over the tracks.  The Ghost Crossing Phenomena was eliminated.  The following post was first published in 2013 and frequently updated. 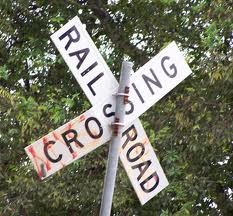 For years, San Antonio teenagers have headed to the south side to experience the "Ghost Crossing." Local legend states that a school bus stalled on the tracks and was hit by a train at this crossing. Today if you leave your car in neutral, the ghost of those school children will push you across the tracks to safely.

Where: The crossing is on Shane Road where it intersects with the Southern Pacific Rail Line. Take Presa south off SE Military Drive. Turn right on Southton Road, travel under Loop 410 and right again on Shane Road. Continue to the train tracks.

What to do next: Turn off your engine. Put your car in neutral. Your car will mysteriously start to roll from a dead stop over the tracks.

Scary Scooby Doo Stuff:  After your car is pushed over the tracks, take some baby powder and dust the back of your car. You will find finger prints of the ghosts that pushed your car across the tracks.

Reality Check: Chances are pretty high that those fingerprints are yours, from the last time you got into your car's truck, unless of course, you wipe your trunk of fingerprints every time you access your hatchback.

More Scary Stuff: The subdivision nearby has streets named after the children who died at the tracks.

Reality Check: The streets are named after children. However, Bobbie Allen, Cindy Sue, Laura Lee, Nancy Carroll and Richey Otis are actually the names of the developer's grandchildren.

Even More Scary Stuff: If you listen closely, you can hear the cries of the ghost children in the distance.

Reality Check: There is a nearby farm, which has peacocks. The haunting noise you hear is actually the cries of the peacocks.

History of the Ghost Crossing: There is no record of a bus accident at the rail crossing. The story of the Ghost Crossing goes back many years. At one time, there was a version that a horse drawn cart was caught on the tracks.
There was a school bus that was caught on tracks in Salt Lake City in 1938. Twenty six children lost their lives in the accident, and the story was front page news across the nation.  Today it is law that school buses must stop at rail crossings and look for trains before crossing the tracks.

Similar Legends: Gravity Road in New Jersey is quite similar to the Ghost Crossing. Notice how close that legend parallels the San Antonio tale

The Ghost Crossing has received interest from a number of Television shows. Here is an excellent clip from one national broadcast which debunks the local legend.

Enjoy My Blog? You might also enjoy my book, The Travis Club