Yes, that Santa Anna. Battle of the Alamo Santa Anna.  His time in San Antonio is well documented. What is lesser known is his role in the invention of chewing gum.
After his surrender in San Jacinto, Antonio Lopez de Santa Anna lived in a variety of place including Cuba and Staten Island, New York.
According to the well-researched book, Chicle, The Chewing Gum of the Americas, From the Ancient Maya to William Wrigley by Jennifer P. Mathews, Santa Anna was trying to find a way to fund a return to the presidency of Mexico while living in New York.  Santa Anna had a supply of chicle from Vera Cruz that he chewed for pleasure.  Chicle is produced by the sapodilla tree and used for decades by indians as a chewable snack. With the assistance of amateur inventor Thomas Adams, Santa Anna tried to create a valuable substitute for rubber using chicle.


When their attempt at fortune failed, Santa Anna returned to Mexico, penniless. Adams, left with a large supply of chicle, cut it into bight size pieces and sold it as candy. Adams called his treat, Chicklets and eventually made his fortune. The rest is history. 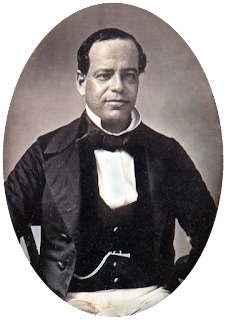