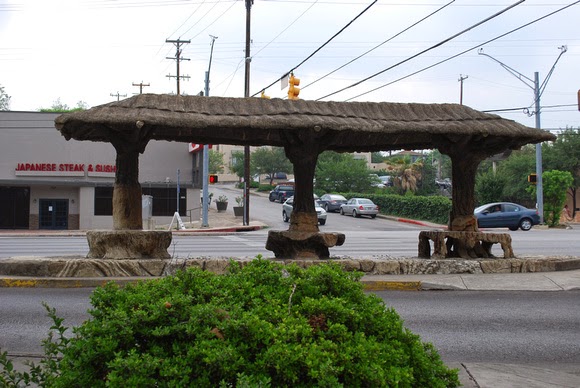 Thousands of San Antonians have caught the bus on Broadway near the Alamo Heights Central Market grocery store and have sat in a peculiar bus stop that appears to be made of petrified wood. But few know the story behind the unique piece of ‘faux bois’ artwork, and the man who made it. The city's most accessible work of art was built at the corner of Broadway and Patterson in 1931, by Dionicio Rodriguez. The bus shelter was donated to the city of Alamo Heights by the Alamo Cement company and has only been moved once, a few feet when the street was paved.
Many are fooled when looking at the bus stop, believing that the shelter is made of petrified wood. Actually it's made of cement, Rodriguez's chosen medium. The artist, who was born in Mexico City in 1891, learned the unusual art form from a Spanish national who showed him a unique chemical process to make cement look like petrified wood. One of Rodriguez's earliest patrons was Dr. Aureliano Urrutia, who introduced him to Charles Baumberger Sr., founder of Alamo Cement.

Baumberger commissioned several pieces, including the Alamo Heights shelter, a fish pond at the cement plant, and a unique fence also at the Alamo Cement plant headquarters. The old cement plant office has been redeveloped into a restaurant, where patrons can now enjoy the work that had been hidden for years.

Two examples of his work can also be found in Brackenridge Park.

Two examples of his work can also be found in Brackenridge Park.  A bridge near the park's headquarters and an old entrance to the Sunken Gardens were both his creations. The gate to Sunken Gardens reads "Chinese Tea Gardens" rather than Japanese Sunken Gardens. That's because the entryway was made during World War II when anti-Japanese sentiment was high, and the name of the gardens was changed.

Other examples of his work can be found at private residences throughout the city, as well as in Memphis, Little Rock, Washington, New York City, Chattanooga, Cuba, and Mexico.
Rodriguez was very secretive about the chemical process that transformed the appearance of the cement. Once he started, he used simple tools such as a fork, knife, and spoon to shape his creations. Rodriguez also preferred to use local cement in his work because it contained no sand or mortar.


Rodriguez died in San Antonio in 1955, leaving behind numerous pieces of art made from his mysterious process.  One of his protégées, his great nephew Carlos Cortez continues his faux bois artwork, include the grotto on the Museum Reach extension of the Riverwalk.